The San Diego MLS Green Features Initiative is taking shape. The growing consumer interest in sustainability is attracting attention. In California, energy efficiency has been cost-effective since 1978. Homeowners who have invested in energy efficient upgrades need to see the value of their investments reflected in appraisals and selling prices. Buyers are shopping smarter when it comes to energy.

In California, there’s a huge difference between home built before 1978 and those built since. Homes built today are more than 400% more energy efficient than older homes. These improvements lower utilities costs and make homes safer, healthier, and more comfortable,

Behind the scenes, progressive San Diego Realtors and allied professionals continue to gain momentum in their effort to include green features in MLS listings. Interest in this effort stems from a strong sentiment in the industry that “green” provides value to clients trying to respond to rising energy prices and upgrade an aging, inefficient, often uncomfortable housing stock. The “green” designation is growing more popular among Realtors,

Federal, state, and local governments have taken notice of the cultural shift toward sustainability and have spread around incentives to improve buildings’ efficiency and diminish the country’s dependence on non-renewable energy sources.

Areas where green MLS statistics have been kept show the positive trends that green home sales are making in their area. For instance, in Atlanta during 2009, certified green homes sold 3.6% closer to list price and were on the market 31 days less than conventional new construction (108 vs. 139 days).

One way to ensure that the industry is prepared for the growing attention and demand for more efficient, comfortable homes is by making it simpler to find, promote, and evaluate green properties. As the San Diego MLS Green Features initiative gains steam around the country, building professionals in San Diego have established cross-functional teams to plan and execute green MLS here.

What can you do?

What’s Next for Net Metering

Net metering allows homeowners with solar systems to feed excess energy back into the grid and makes their utility company compensate them for it at retail rates. This shows up on monthly bills as a offset. In some months net metering can earn homeowners a credit. 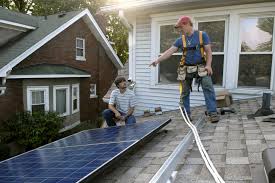 It’s no wonder the solar industry is BIG on net metering – and utilities are not. The current arrangement was coming to completion – here’s what’s on the table to replace it.

This looks like a win for the solar industry, which has been fearful of losing this powerful incentive entirely. It must be noted that the rules around solar – from incentives to clean energy use mandated by recent Climate Action Plans to net metering all continue to morf as the dance toward sustainability quickens.

SAN FRANCISCO, December 15, 2015 – The California Public Utilities Commission (CPUC) today helped ensure that Californians will continue to receive the benefits of using clean energy by proposing a successor program to the current Net Energy Metering (NEM) program. NEM allows a customer-generator, such as those who have installed solar photovoltaics (PV), to receive a financial credit for power generated by their on-site system and fed back to the utility.

The Proposed Decision issued today by CPUC Administrative Law Judge Anne E. Simon establishes a NEM successor program that would continue the existing NEM structure while making some adjustments to align the costs of NEM successor customers more closely with those of non-NEM customers.

In creating a successor program to the existing NEM program, the CPUC was directed by Assembly Bill 327 (Perea, 2013) to ensure that customers pay their appropriate share of costs while encouraging a sustainable customer-sited renewable distributed generation program. The Proposed Decision attempts to strike a balance between these requirements. These new costs for NEM successor customers include:

● One-time interconnection fee (likely to be approximately $75-$150). This fee, which represents the costs for a utility to review and ensure that a NEM system interconnects safely to the grid, has historically been borne by all utility customers, including non-NEM customers. The Proposed Decision finds that these interconnection costs can be paid by NEM successor customers themselves without jeopardizing the economics of the NEM installation.
● Non-bypassable charges that all utility customers pay. Non-bypassable charges are used to fund low income and efficiency programs. They are the equivalent of approximately 2-3 cents per kilowatt-hour of energy consumed. Historically, NEM customers have only paid for non-bypassable charges if over the course of a year they consumed more electricity from the grid than their installation produced. The Proposed Decision finds that NEM successor customers should pay for non-bypassable charges on all energy they consume from the grid, regardless of the amount of energy they have exported to the grid.

The Proposed Decision is scheduled for the CPUC’s January 28, 2016, Voting Meeting.

The Proposed Decision is available at here.

For more information about the CPUC, please visit www.cpuc.ca.gov.